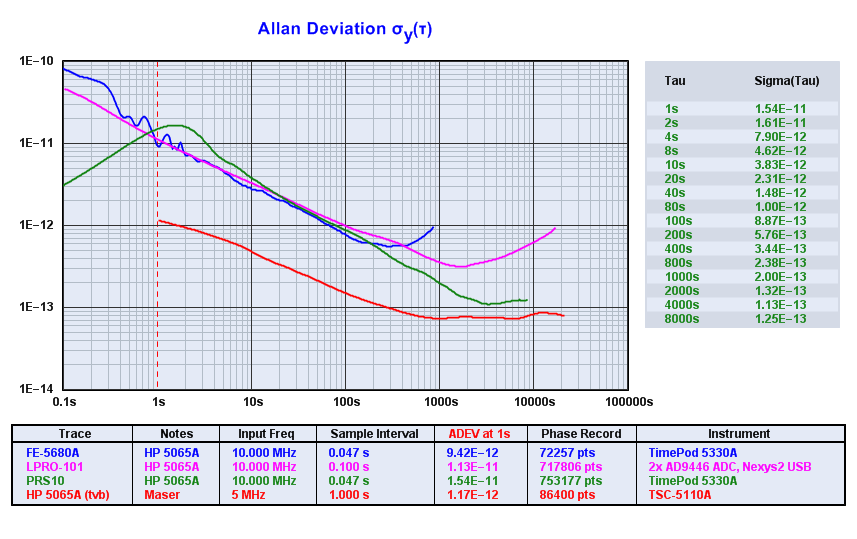 Among the well-known time and frequency standards from Hewlett Packard and other vendors, the HP 5065A rubidium vapor frequency standard offers the best medium-term frequency stability of any device that the casual (or even hardcore) "time nut" is likely to encounter. The Allan deviation of the best commercial cesium-beam standards like the HP 5071A tends to cross into the E-14 range between t=1000 seconds and t=10000 seconds, while an HP 5065A can reach this level of stability in under 500 seconds. To assess the performance of an HP 5065A fairly, you need an H-maser.

Of course, no conventional rubidium-vapor clock can serve as a drift-free primary standard, so cesium-beam technology was in no danger of obsolescence when HP announced the 5065A. But now, over forty years later, everyone has access to a perfectly usable (if noisy) primary standard in the form of cheap GPS-disciplined oscillators. The combined stability of a GPSDO and a quiet Rb standard is hard to beat.

Unfortunately, well-sorted HP 5065As are if anything even harder to find than working cesium standards. Someone who owns a good HP 5065A is probably not interested in selling it. So it seemed like a good idea to compare the HP 5065A's stability and noise performance to some of the "telecom grade" rubidium standards available from eBay, hamfests, and other venues.

As has long been the case with GPS clocks, the Asian surplus vendors on eBay are selling our own stuff back to us at, well, pretty darned reasonable prices. As of February 2012, ample quantities of FE-5680A standards are selling for less than $50. They've become popular with experimenters and video bloggers.

The Datum/Efratom LPRO-101 has also been widely available in the $100-$200 range for the past few years. The LPRO-101s have proven to be excellent performers. Like many of the other small rubidium standards, they were designed for a long maintenance-free lifespan. Reports suggest that 5-10 years is realistic.

On paper, the PRS10 from Stanford Research Systems seems like the best candidate to play second fiddle to the HP 5065A, and the short/medium-term stability tests conducted above seem to bear this out. The unit tested here was taken from a Symmetricom TimeSource 2700 CDMA frequency standard that was never installed. At least when tested with near-zero operating time, it looks like it may actually be competitive with the 5065A I used as a reference in the tests. You can see where the progress of the green trace from the PRS10 halts abruptly as soon as it approaches the HP 5065A's ADEV floor. The two traces remain parallel from t=2000s to near t=10000s, before trailing off into statistical irrelevance. (The red trace was obtained from a different HP 5065A than the one I'm using, but I believe that their performance is similar.)

<!-- Atomic standards usually have a lot of short-term noise compared to better-quality standalone crystal oscillators. Whether they depend on microwave or optical techniques, and whether the element in question is hydrogen, cesium, rubidium, or something else, the process by which the quantum state of the element's valence electron is "interrogated" requires high-gain amplification of relatively weak signals. <P> Why are some atomic standards better than others? A key reason is that the quantum processes employed in the better varieties yield a narrower spectral line width -- an effect that would be associated with a higher Q factor in a more traditional resonant circuit. A narrower line width implies that a better signal-to-noise ratio will be available in the synchronous detector stage. At that point, the ball is out of the hands of Rabi and Ramsey and squarely in the court of Shannon and Nyquist.

--!> When contemplating the use of any of these standards in an application that involves putting signals on the air or trying to recover them from a crowded or noisy band, it pays to examine their phase noise characteristics. The results seen above are not surprising or difficult to understand, especially after a look under the covers.

Being the smallest and lightest of the units tested, the FE-5680A doesn't have a lot of room for optimization. What it does appear to have is a AD9832 DDS chip that's in a position to influence the noise level in its 10 MHz output signal. These particular surplus units appear to have been heavily customized for a market that didn't require the FE-5680A's standard phase noise specs (which are normally much better than observed here.) Instead, the application must have required a lot of additional latitude in the frequency-trimming department -- much more than could have been achieved by adjustment of the C-field bias alone. The FE-5680A could still be quite useful in traditional communications applications, but it would be necessary to use it to discipline another crystal oscillator first.

The next best performer is the LPRO-101. Like other atomic frequency standards, the clocks tested here all work by using a relatively noisy quantum-mechanical process -- in this case the miniscule change in light transmission through a rubidium-vapor cell when exposed to microwave energy at just the right frequency -- to discipline an ordinary crystal oscillator. The optimum bandwidth of the control loop is easy for the designer to specify -- it'll be near the point on the phase noise graph where the crystal's long-term stability becomes worse than the physics package's short-term stability.

I like the LPRO-101's plot because it really shows where the bodies are buried, in a quantum-mechanical sense. The LPRO doesn't hide the interesting control loop characteristics under a lot of DDS spurs, as the FE-5680A did. Instead, we can easily tell that the rubidium/quartz "handoff" occurs between 10 and 100 Hz. At offsets higher than 100 Hz, the phase noise plot looks like a conventional oscillator with a white(ish) broadband noise floor. Closer to the carrier, the phase noise gets worse as the control loop's weak-signal detection process comes into play.

Left undisciplined, the LPRO's crystal oscillator would look much the same -- except that its phase noise profile would continue getting worse below 10 Hz rather than showing signs of leveling off. This would manifest itself as an upturn in the ADEV plot, rather than the downward progress into the parts-per-trillion range that we see.

In fact, the PRS10 does a great job at demonstrating this very effect. While designers of small rubidium standards usually put a lot of care into the design of the physics package and the microwave synthesizer, they tend to take the cheap way out when it comes to the crystal oscillator. After all, the crystal will never be allowed to drift, so why bother putting a high-quality oscillator in an atomic standard? The designers at SRS knew better (or at least were given more money to spend). The PRS10 has much lower phase noise and jitter between 1 Hz and 1 kHz than the LPRO-101 because it uses an ovenized SC-cut crystal rather than a cheap TCXO. While Datum/Efratom had to use a wide loop bandwidth in the 10-100 Hz range to keep their lower-cost crystal under control, SRS was able to keep the loop bandwidth down to 0.2-0.3 Hz, since they knew their oscillator would be "quieter" than the rubidium cell at offsets below 1 Hz from the carrier.

PLL design usually involves tradeoffs, of course, and the PRS10's victory over the LPRO-101 wasn't unalloyed. There's a small area between about 0.1 Hz - 0.5 Hz in the phase noise plot and t=0.8s - 10s on the ADEV plot where the LPRO-101 and FE-5680A are both more stable than the PRS10. Perhaps the engineers at SRS were going for lower jitter in the audio range between 1 Hz-1 kHz at all costs. Did the extra money that went into their SC-cut OCXO come out of the budget for the physics package? It's probably not fair to speculate, because -- again -- this particular PRS10 had zero operating time, while the LPRO-101 and FE-5680A were pulled from active service. A discussion of the effects of aging on newly-installed rubidium clocks is a subject for another paper, cited below.

The HP 5065A does well in the close-in noise competition below 100 Hz. Its OCXO as well as its physics package are both relatively stable compared to those in the smaller rubidium stndards, so the designers were able to avoid the compromise that shows up in the PRS10's trace below 1 Hz. However, the presence of a noisy divider and buffer amplifier between the HP 5065A's 10 MHz OCXO and 5 MHz output jack allows the PRS10 to pull ahead at offsets beyond 100 Hz. I added a buffer amplifier to gain front-panel access to the quiet, stable output of the 10811-60109 OCXO inside, but it would be cheating to use this "aftermarket" output for the PN test!