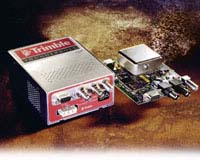 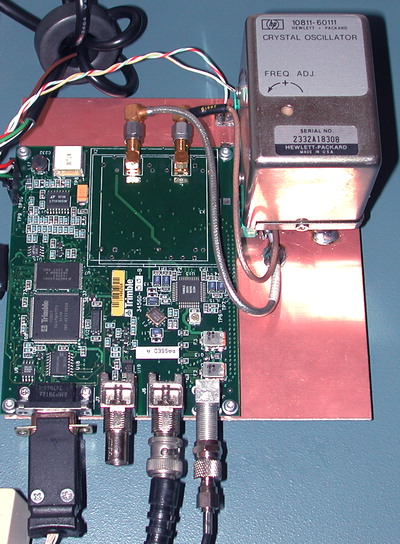 From the amateur's point of view, GPS-disciplined oscillators are a great way to acquire a 10-MHz or 1-pps "house clock" on a budget. Typical performance of a GPS clock's 10-MHz output is better than 1E-10 at a 100-second time scale -- often much better -- and of course there's no long-term drift at all.

If you know what a GPS-disciplined frequency standard does, chances are you either want one or you already have one. There are many options when it comes to purchasing or building your own GPS standard, but there's a lot to be said for the Trimble Thunderbolt model. Thunderbolts are exceptionally reliable, and they're largely "plug and play" in nature, requiring only an inexpensive power supply and GPS antenna to provide a time/frequency standard competitive with cesium or rubidium atomic standards without the associated maintenance concerns.

Thunderbolts were originally designed for E911 "enhanced 911" applications, in which precise time-of-arrival readings at multiple cell sites can be used to locate callers in distress. Thanks to telecom consolidation and ever-changing regulatory standards, a large number of Thunderbolts have appeared on the surplus market over the last few years. Typical prices range from US $100 to $200.

Because the GPS-disciplining process is meaningful only at timescales beyond a minute or so, the OCXO is the heart of any good GPS clock. GPS handily overcomes the effects of long-term oscillator aging, but it does nothing for short-term drift and phase noise. If you are using your GPS standard as an external 10-MHz reference for a spectrum analyzer, synthesizer, or other application where it will be multiplied into the GHz neighborhood, you can imagine how important the reference's spectral purity is.

Recently (2008) some 2002-vintage units with particularly-high-quality OCXOs have appeared for sale in the sub-$200 range, but many of the Thunderbolt units in the field are probably a few years older, like the one shown here. The lower-grade OCXO in this unit had very good in-channel phase noise performance, but poor stability at 100 Hz and below. So it made sense to try to upgrade the OCXO, a process made relatively simple by the presence of unused SMA jack pads on the Thunderbolt's PC board.

After removing the factory OCXO, jacks installed at these pads were connected directly to the voltage-controlled tuning and RF output lines of an HP 10811-60111 OCXO. The SMA jack closest to the corner of the PCB (J10) provides the OCXO's tuning voltage, while the remaining jack (J9) is connected to the oscillator's 10 MHz output.

The Thunderbolt's 12V oscillator power connection was also suitable for direct connection to the HP OCXO, and because the Trimble control software allows the user to adjust the loop coefficients used to phase-lock the OCXO, it was easy to change the tuning coefficient from -5 Hz/volt to the 0.2 Hz/volt value needed for stable operation of the 10811.

The only complication was the need for a separate 24V oven supply in my temporary "breadboard"-style test bed. This test platform will ultimately be housed with a single low-noise linear power supply.

As seen in the phase noise plot below, the replacement HP 10811-60111 OCXO is more than 25 dB cleaner than the original part at 1 Hz. This is a massive improvement, easily verified by noting significantly less wander in TBoltMon's PPS and ppb timing output fields.

The high-frequency spurs in the blue trace were caused by the Lucent switching regulator assembly in the original Thunderbolt housing. Replacement of this supply with an external +12/-12/+5 volt switching supply eliminated most of the original Thunderbolt's spurs, lowering its phase noise floor as well. Some of the improved noise/spur performance was lost when the 10811-60111 upgrade was performed, but the close-in improvement more than justifies the upgrade.

The orange trace is from one of the newer Thunderbolts from the 2008 TAPR group purchase, which, as noted, already has a 10811-class OCXO. Improving the performance of this particular Thunderbolt would not be trivial.

The graph above shows how well a Thunderbolt can perform when carefully optimized. The blue trace depicts the typical performance of a late-model Thunderbolt from the TAPR group purchase with its factory default settings, including the default control-loop time constant of 100 seconds. High quality OCXOs will actually lose performance when steered by a GPS receiver at such short timescales, especially when operated in a benign environment, so you'll probably want to increase the time constant when upgrading the OCXO. As with any PLL, the loop parameters interact to some extent, so the optimization process tends to involve adjustment of several values.

The magenta trace was taken after the following modifications, in (rough) order of importance:

These parameters were tweaked by Warren Sarkinson over the course of several days' observation of the unit's behavior, and his effort really paid off. Performance of the 10811-based Thunderbolt is nearly on par with one of leapsecond.com's best Z3801A clocks, at <1E-12 at all offsets.

The magenta trace is actually limited at timescales below 10 seconds by noise from the HP 5065A rubidium standard. The green trace gives a better idea of the 10811-based Thunderbolt's short-term performance, as its reference is a very stable undisciplined OCXO. 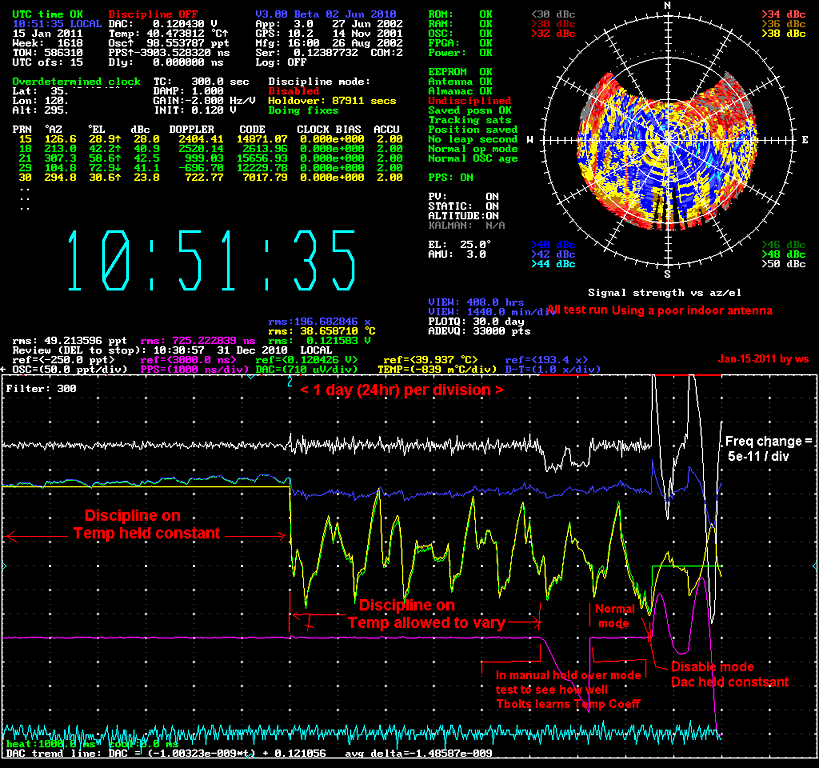 At right is a detailed plot by Warren Sarkinson showing the behavior of a stock Thunderbolt with 3.00 firmware, Trimble-labelled OCXO, and tweaked disciplining parameters under extended holdover conditions. (Click the image for a full-sized version -- the details are worth it.) The ability of the Thunderbolt's firmware to maintain control of the OCXO without a usable GPS signal is impressive.

This plot gives you a good "feel" for the difference in stability between a GPS standard and a high-quality crystal oscillator by itself. Towards the end of the white trace, the combined effects of the oscillator's aging rate and temperature coefficient are plainly evident. On the other hand, for the first six days, the Thunderbolt was locked to GPS and its temperature was kept under control, yielding stability about 100 times better. 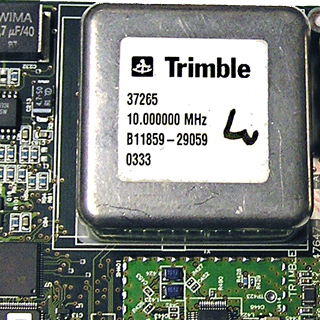 Shown at right is an example of the "good" oscillators in the post-2002-era Thunderbolts. The key identifier is the Trimble label, vis a vis the older Piezo-labelled units seen earlier on the page. The Trimble-labelled oscillators are superb performers. With a broadband floor below -170 dBc/Hz and a corner near -160 dBc/Hz at 100 Hz, these oscillators are capable of pushing the limits of the best phase noise measurement gear available... 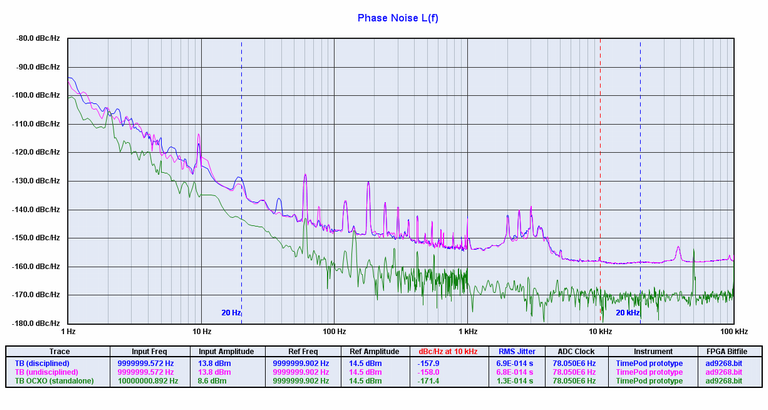 ... but only when removed from the Thunderbolt PCB. As the plot above demonstrates, the Trimble PC board contains noise sources and buffer amplifiers that keep the OCXO from really showing what it can do.

In this plot, the blue and magenta traces are from an unmodified late-model Thunderbolt in disciplined and undisciplined mode, respectively. These traces are largely equivalent to the orange trace in the phase noise plot posted earlier. The green trace shows the performance of the oscillator after it was removed from the Thunderbolt and powered up with an HP bench supply. The spur near 50 kHz is an instrument artifact. 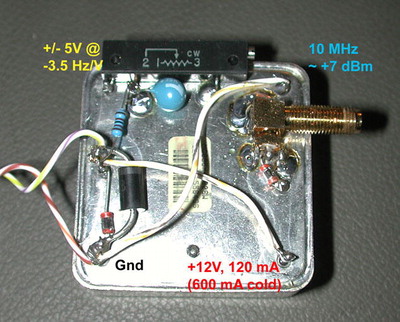 Visible at right are the connections used for powering up and fine-tuning the frequency of the Thunderbolt OCXOs. The large diode at left is for reverse-power protection, and the small cylindrical glass components are 0.1 uF bypass capacitors. The 2K 10-turn trimpot's wiper is bypassed with a 4.7 uF tantalum capacitor.

The trimpot is connected to ground at one end and +12V at the other end, using a 2K resistor to limit the maximum applied voltage to roughly +6V. Because the oscillator's tuning voltage ranges from -5V to +5V, this arrangement allows access to only half of the total adjustment range.

Unfortunately the output of the oscillator is rather low, at +6 to +8 dBm. Phase noise measurements and other critical applications may benefit from a low noise isolation amplifier to increase the available power.