This page describes a common-emitter HF amplifier with transformer feedback and active bias stabilization. This circuit, based on a design by Bruce Griffiths, provides a small amount of gain with about 40 dB of reverse isolation at minimal component cost, along with exceptionally good residual phase-noise performance. These attributes make the circuit well-suited for use in buffer amplifier applications, where an internal signal needs to be routed externally without adding noise.

The prototype characterized here was used to add a 10 MHz output jack to an HP 5061A cesium-beam standard. Many 5061As have been upgraded in the field with the 10 MHz HP 10811-60109 OCXO from the 5061B model, but unlike "real" HP 5061Bs, the upgraded models didn't provide a 10 MHz output at the front panel. A buffer amplifier is needed to keep from loading the 10811 excessively, to avoid injection-locking problems, and to keep external signals out of the clock's control loop. Bruce's amplifier is a good candidate for this application. 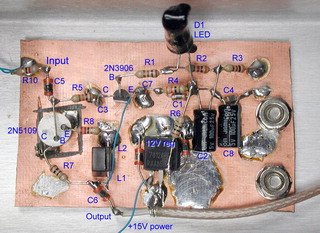 This particular amplifier circuit is a variation on David Norton's "noiseless feedback" topology from the early 1970s. In Bruce's circuit, the traditional common-base Norton scheme gives way to a common-emitter layout, with the transformer feedback element still present in the collector and emitter legs. DC bias stabilization is provided by a PNP stage with a well-filtered LED reference.

The LED specified by Bruce is a superbright part with a 2.0-volt typical forward drop, but I used a random part from the junk box with a forward drop closer to 1.7 volts. Gain is determined by the transformer's turns ratio; I used a Mini-Circuits T13-1T transformer in my implementation. Transistor choices are equally uncritical, with a 2N5109 at Q1 and a 2N3906 at Q2 in my version of the circuit.

Input impedance is reasonably high, as typical of other common-emitter designs. Taking advantage of this, I used a 330-ohm resistor in place of R10 in the schematic above, with an 82-ohm resistor between the R10/C5 junction and the 10811's output pin (1, see photo below at left). The 10811 is otherwise loaded by 511 ohms in this circuit, and the additional 400 ohms presented by the buffer amplifier doesn't appreciably lower the amplitude available to the 5-MHz divider stage (see plot below). 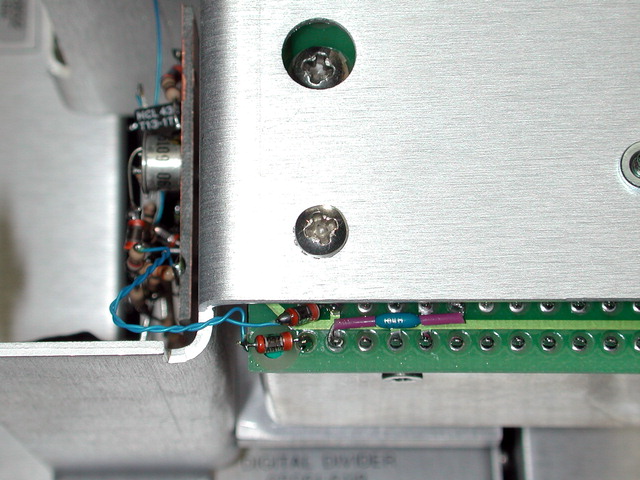 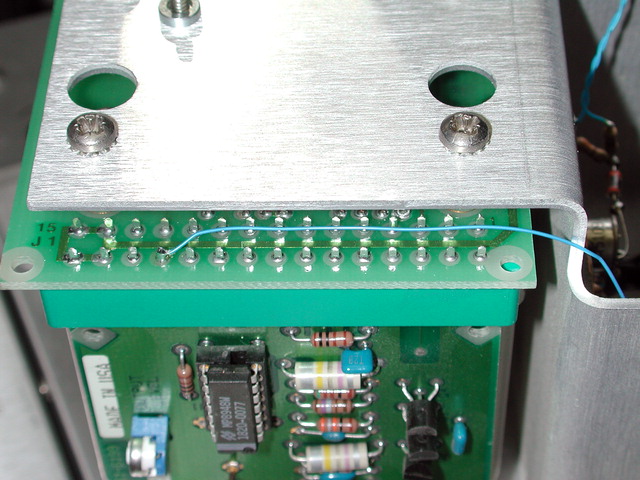 At 5 MHz (left screenshot above), the additive phase noise imposed by the amplifier is very close to the HP 3048A's own measurement floor. Shown for comparison is a more complex TNS grounded-base amplifier design and a simple MMIC amplifier constructed with a Mini-Circuits GALI-3. All of these amplifiers are good performers, capable of amplifying the signal from a 10811-class OCXO without adding much phase noise. Only the CE Norton amp, however, offers a good compromise between S12 and circuit complexity.

A similar test conducted at 10 MHz reveals that the Norton amplifier offers better performance than either of the other candidates. It's still very close to the HP 3048A's own residual floor.

The plot above shows observed gain (S21) and reverse isolation (S12), with R10=51 ohms and the T13-1T transformer in place. The 2N5109 at Q1 offers good flatness through 100 MHz and beyond, although S12 begins to degrade beyond 10 MHz. This could be due to the rather sloppy layout used in my prototype, and/or the characteristics of the Mini-Circuits transformer.

The plot above shows input and output VSWR, respectively, with R10=51 ohms.

Above is the output spectrum from the 5061A's newly-added 10-MHz jack.

November 8, 2020 Thanks to Taka Kamiya, KB4EMF/ex JF2DKG for his contribution of KiCad PCB files and Gerbers for the amplifier!