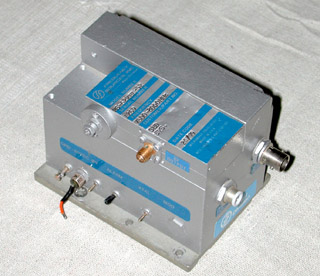 In the last few weeks of 2005, a discussion of signal-generator noise performance on the hp_agilent_equipment Yahoo group gave me a good excuse to test several well-known HP models with PN.EXE, my homebrew noise-measurement application for GPIB-equipped Windows PCs. My goal was twofold: to understand the strengths and weaknesses of the different signal sources in my "collection," comparing their observed performance figures with the factory's specifications; and to develop a noise-measurement methodology for sources which are, for the most part, too clean to measure directly on a conventional spectrum analyzer.

The graph at left shows the absolute phase-noise measurement limits for four different RF/microwave spectrum analyzers commonly used in commercial and military environments. These analyzers are available on the surplus market at prices ranging from that of a new TV set to that of a new car. Like most superheterodyne radio receivers, their composite (AM+PM) noise floors are determined by the quality of their first local oscillators. And as with any high-quality signal source, local oscillator performance is determined by complex and arcane mathematical equations. To a first approximation, these equations all simplify to "$/kg/dBc/Hz."

Spectrum-analyzer manufacturers face a tough problem: to achieve image-free coverage from DC to the VHF/UHF/microwave region, they need to use high IF frequencies, typically several GHz. That means their first local oscillators also have to operate in the GHz range, where it's difficult and expensive to generate a spectrally-clean signal. Hewlett-Packard had it (relatively) easy when they designed the popular signal generators tested here: none of these models has to tune past 1280 MHz, and the whole box can be devoted to the problem, rather than only the first LO section of a larger instrument.

As a result, even lower-quality signal generators are difficult to characterize by simply connecting them to the RF input jack of a spectrum analyzer and looking at the resulting noise profile. Most of the noise will be from the analyzer's first LO, rather than the generator ostensibly being measured.

Lacking a dedicated noise measurement test set with a phase-locked reference source and quadrature mixer, we need a way to increase the phase noise of the signal under test relative to the amplitude of the signal itself. If we could raise the subject's noise to a level that's at least a few dB higher than the analyzer's own noise floor, we could measure it directly.

The solution used to obtain the graph at right was a microwave "brick" oscillator, an inexpensive and easy way to take advantage of the fact that FM noise and spurs on a signal will undergo amplification by 20 * log10(N) when the frequency of that signal is multiplied by N.

Brick oscillators are commonly available on eBay as surplus from telecom companies and other microwave radio users. These oscillator modules are actually self-contained PLL synthesizers. They accept a reference frequency in the lower VHF range and multiply it by a fixed N-factor to yield an output in the microwave spectrum. They're extremely expensive when new, dirt cheap on the surplus market, and built like brick, well, battleships.

It's easy to tell how to hook up most bricks -- there are few connections other than power, reference input and RF output, and they're usually labelled. Often there's a coarse frequency-adjustment control that can be used to center the brick's lock range around the intended carrier frequency.

This particular brick is a Frequency Sources (West Division) model MS-62XEL-52. I don't remember what I paid for the brick, but it wasn't more than $50. The MS-62XEL-52 is designed to multiply a signal from 100-106.7 MHz by 75x, resulting in a rated output frequency of 7500-8000 MHz. At better than +8 dBm, its output power is ample for high-dynamic range measurement purposes.

Thanks to the brick's 75x multiplication ratio, the LO noise floor of the HP 8566B spectrum analyzer was effectively lowered by 20 * log10(75) = 37.5 dB. (PN.EXE can apply a frequency-multiplication factor automatically, eliminating any need to correct the graph data after the measurement.)

The 37.5-dB improvement is enough to close the gap between the specs of the HP 8566B's local oscillator and most of the generators being tested. However, there are a few caveats when using a brick for noise-measurement purposes: