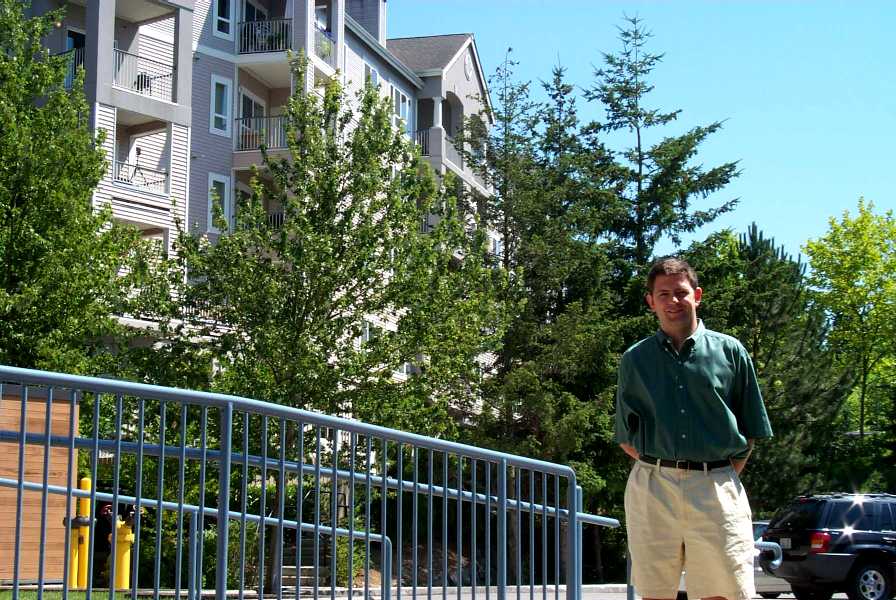 People are curious. A few people are. They will be driven to find things out, even trivial things. They will put things together. You see them going around with notebooks, scraping the dirt off gravestones, reading microfilm, just in the hope of seeing this trickle in time, making a connection, rescuing one thing from the rubbish.

And they may get it wrong, after all.

- Alice Munro, Meneseteung, from Friend of My Youth

As this page suggests, one of my (too many) hobbies includes homebrew electronic R&D work. Some of my projects include a general-coverage DC-1000 MHz receiver, a 10-megabit microwave data link (visible on the balcony tripod in the photo above), and a public-domain application suite for GPIB-controlled test and measurement equipment.

John Carmack at id Software once said something along the lines of, "I knew I was a programmer before I ever saw a computer." Similarly, I knew I was going to be a hardware geek before I learned to read. These pages represent an opportunity to reveal a few of my more interesting projects to the world at large, in a manner which I'm hoping will be reminiscent of great, long-lost tomes such as C.L. Stong's The Amateur Scientist and Alfred Morgan's early electronics titles.

Professionally, I'm a transplant from the Austin, Texas area, currently working on high-performance timing/phase noise instrumentation. I've also developed and support software tools for the PC games industry at RAD Game Tools. I'm the eponymous creator of the Miles Sound System, which has delivered sound-effects and music support for literally thousands of PC game titles since its first release in 1991. (You could think of MSS as the THX of the PC games industry, since its purpose is to help game developers deliver the highest-quality audio experience possible in their products.) Prior to the development of MSS, I worked at Dell Computer Corporation in Austin as a systems software engineer.

Going back even farther, I was the lead programmer on Ultima V at Origin Systems, Inc., and contributed heavily to the graphics technology behind Ultima VI and Wing Commander.