Some three-terminal and discrete series-pass regulators: 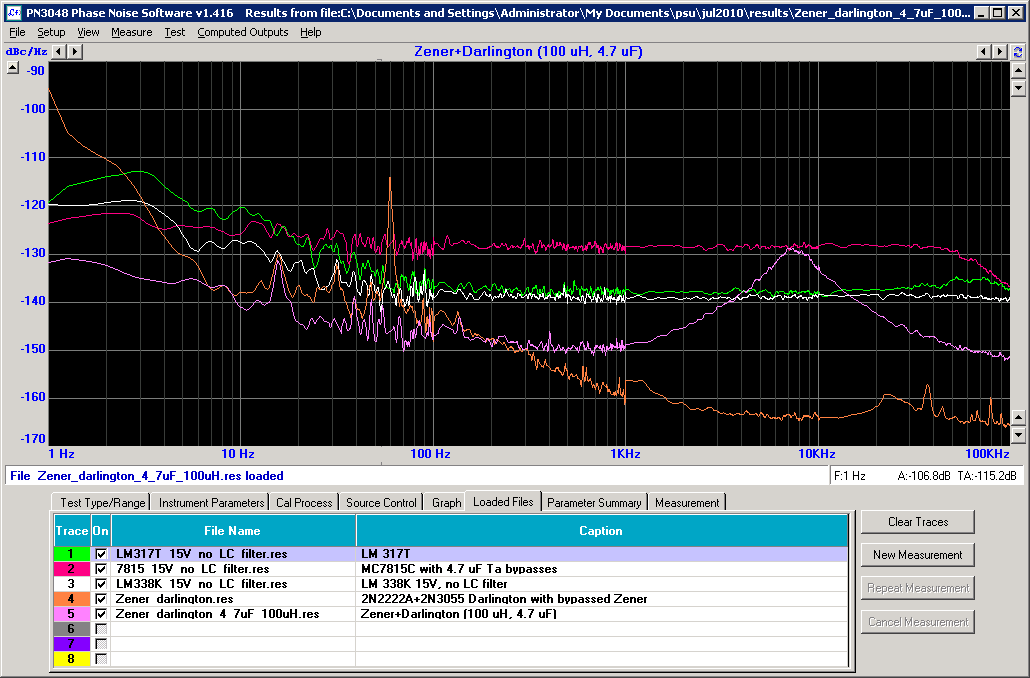 Note inability of HP 3561A FFT analyzer to resolve spurs in the 1-10 kHz decade; this may be fixable with segment-table optimizations. There's also an unexplained 10-dB discontinuity in the HP 6263B's trace at 100 kHz, which was repeatable with that supply but not with any of the others.

While the three-terminal and Darlington regulators were tested with a resistive load, the bench supplies were tested driving a 12-volt relay winding, so some of the low-frequency spurious content may be due to stray AC field response on the part of the relay coil. Coupling to the HP 11848A's 50-ohm baseband noise input was achieved via parallel 0.15 uF tantalum/22 uF aluminum electrolytic capacitors, followed by a 20 dB attenuator (HP 355D). The resulting 3-dB corner frequency is 120 Hz.

Graph scales are in dB below 1 volt RMS (Sv(f) [dBv/Hz] vs. f[Hz]), normalized to 1 Hz bandwidth. For example, -140 dBv/Hz equals 10^(-140/20) volts, or 100 nv/Hz. To generalize this figure to equivalent input noise, multiply by the square root of the system bandwidth. 100 nv/Hz of Gaussian noise in a 1-kHz bandwidth would correspond to approximately 3.2 uv on a true-RMS indicator, neglecting any noise-equivalent scale factors that might apply to the original bandwidth calculation.

The green trace below represents the measurement floor with the DC block/relay coil disconnected from any supplies. Again, 20 dB of range is lost due to the attenuator.

At 1.4 uV/root-Hz or -117 dBv/Hz, Steve's measurement of the LM317 sans Radj bypass is a good match for the -137 dBv/Hz figure seen in the green trace in the first plot, allowing for the 20 dB attenuator. I really need to revisit these measurements with a better test setup...

A bit more on the subject from Jason Breitbarth of Holzworth Instrumentation on Marki Microwave's blog.

Errol Dietz's Reduce Noise in Voltage Regulators discusses the origin of the noise peak as a consequence of resonant interaction between the load capacitance and the regulator's inductive output impedance. Nice example of output impedance measurement with an HP 3577 LF network analyzer.