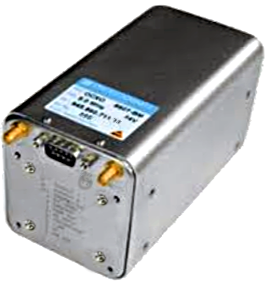 The graphs below compare the phase noise and stability characteristics of three BVA DOCXOs. These include two 8607/08 models (designated TVB and JRA) and one 8607 model that meets option-67 specifications (designated EWK). 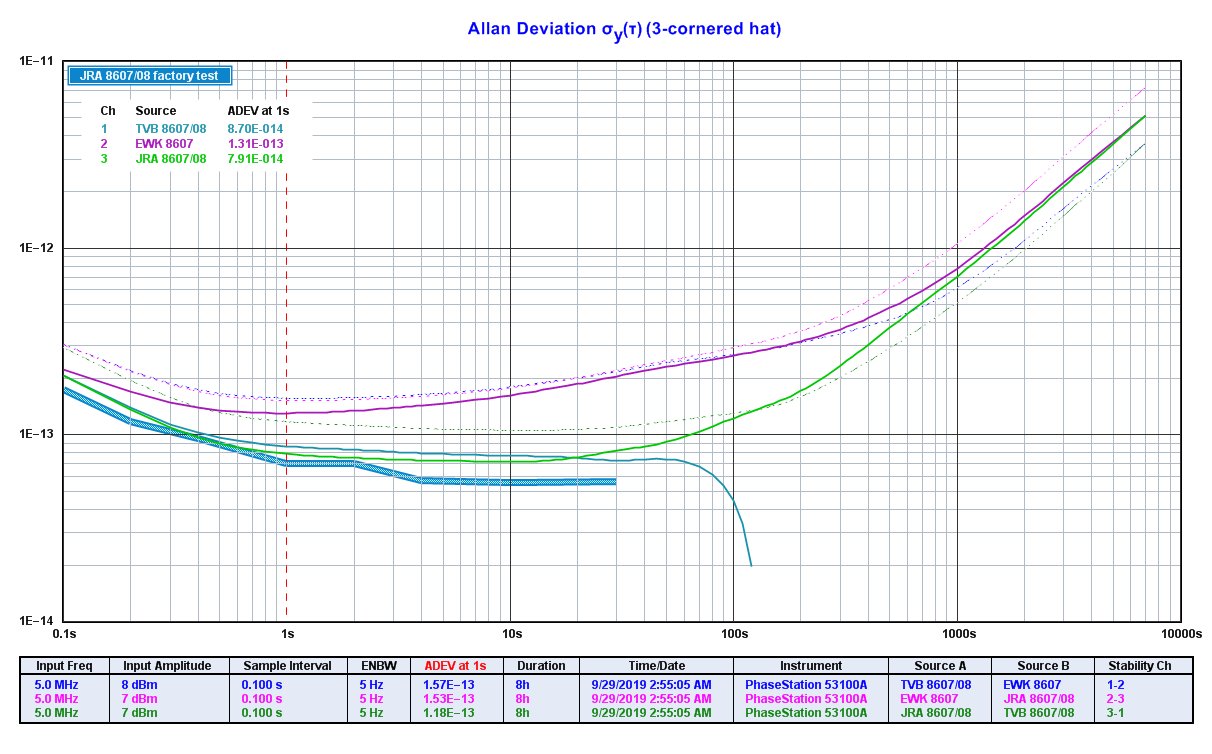 The test mask in the plot above corresponds to the data on page 4 of the OSA factory test report for the JRA unit (500 KB .PDF).

Beyond t=60 seconds the three-cornered hat solution becomes highly questionable for JRA. It is probably reasonably accurate for the EWK unit, but it is completely invalid for TVB.

Several repetitions of this 8-hour test with the same OCXOs yielded very similar traces, but I'm still not especially satisfied with the quality of the results in this initial trial. More testing is needed (see further comments below). 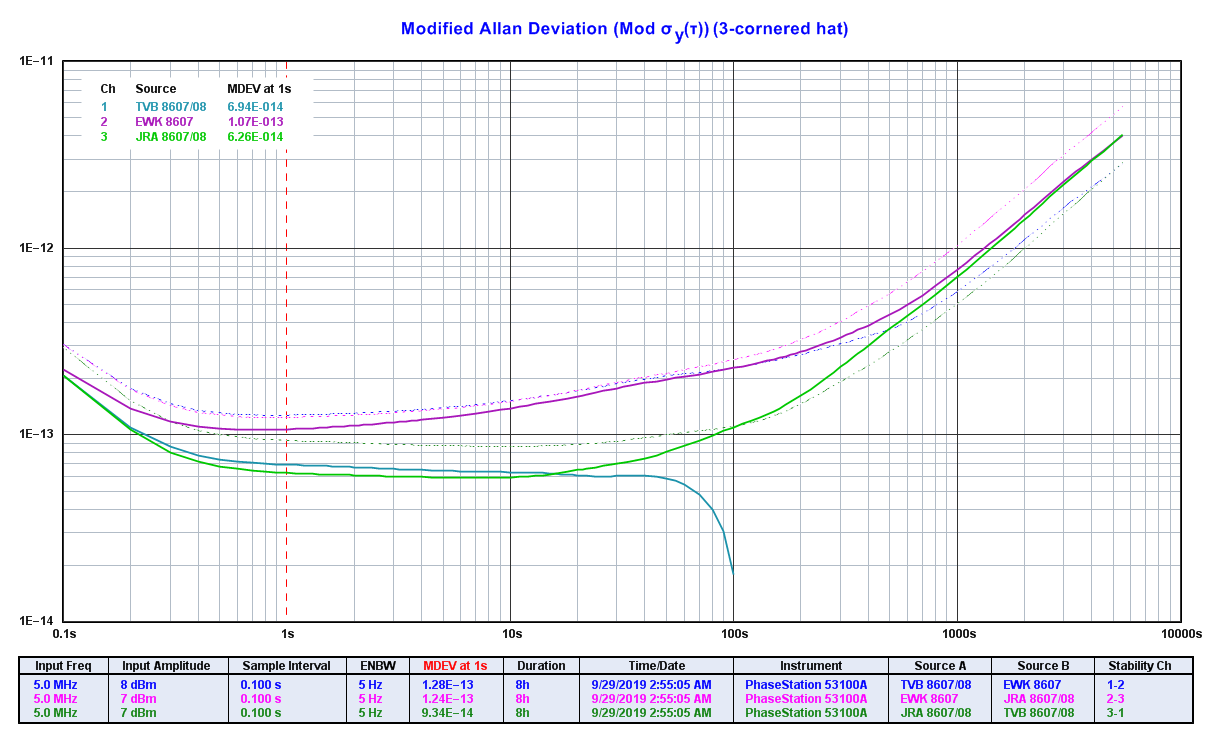 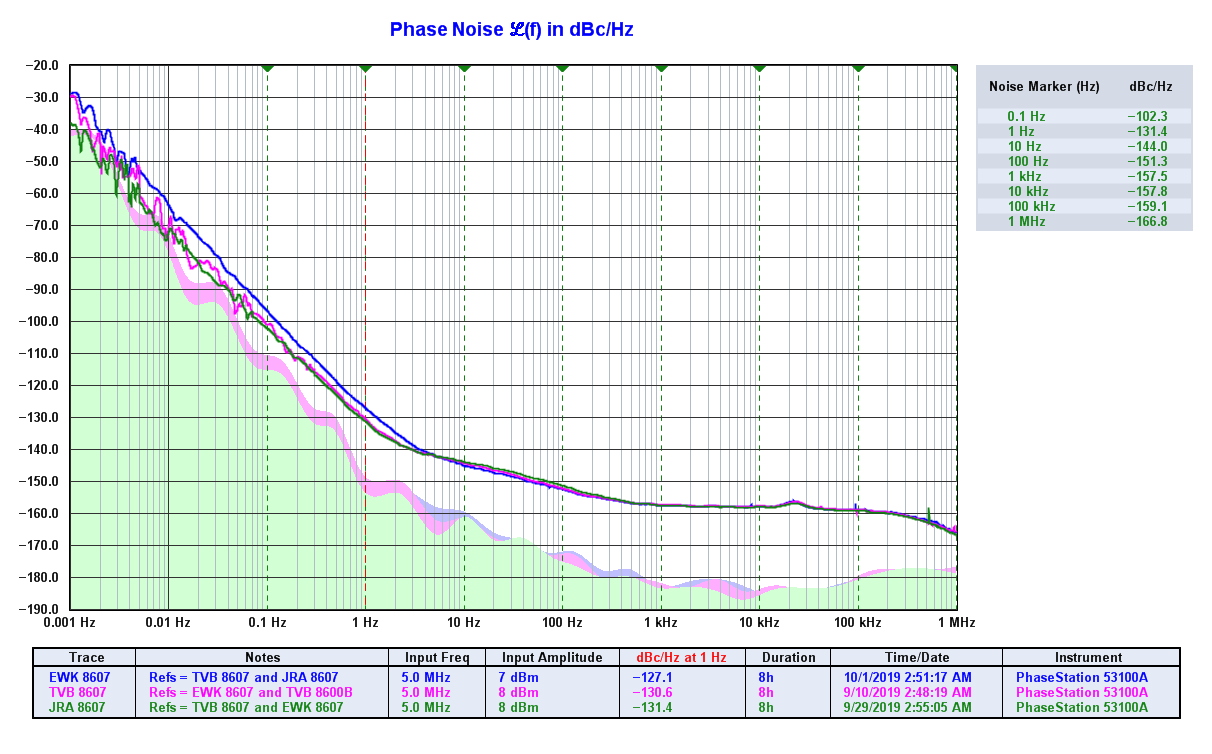 The phase noise results are a good match for those in the test report, as well as the Rubiola citation mentioned in AN 53100A-2. 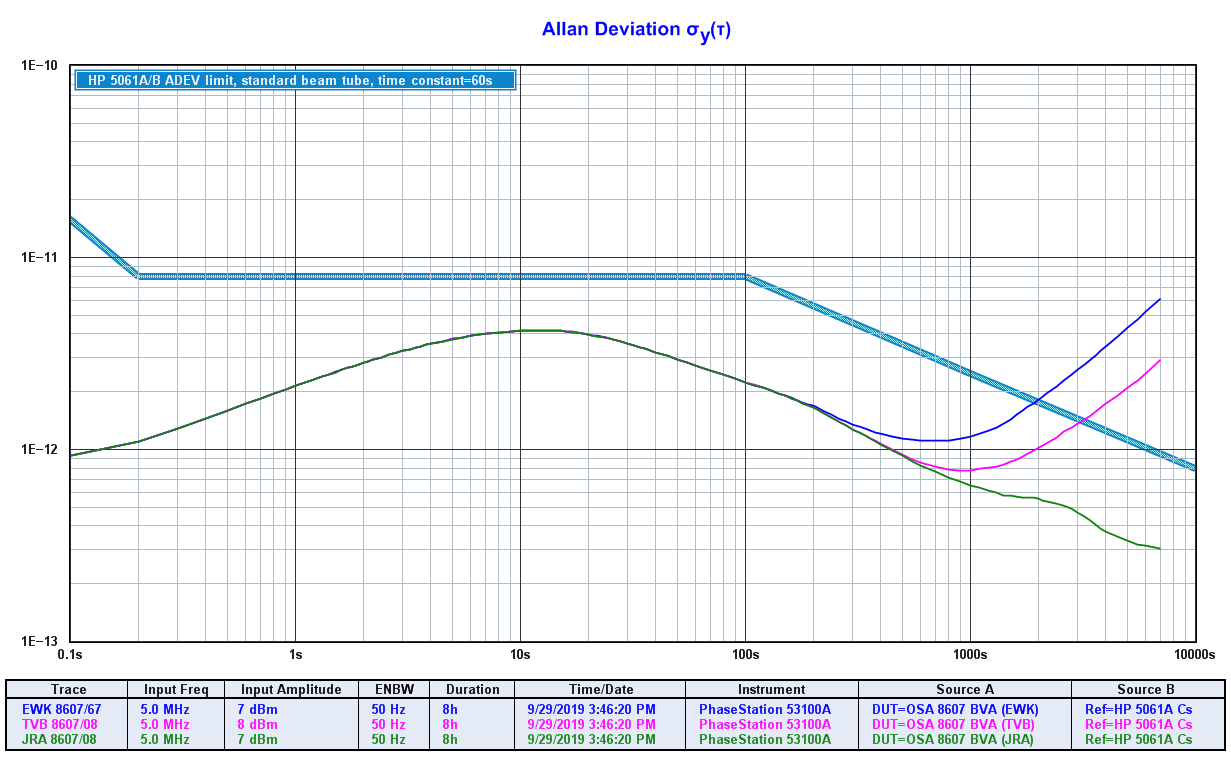 This plot is a simultaneous three-channel measurement of the 8607 BVAs against a single reference, an HP 5061A cesium-beam standard. The JRA unit had been powered up continuously for some time, while the other two had been powered on for a few days and were not as well-shielded from the environment. Which of these two factors (if either) accounts for the additional linear drift exhibited by these two units is unclear.

Edit: At least, it was unclear before going back and examining the data for the October 2, 2019 entry below. The traces above were captured on September 29, at which point the EWK and TVB units had been powered on for approximately five days. Unsurprisingly, this isn't enough time for the oscillators to reach their full performance potential. 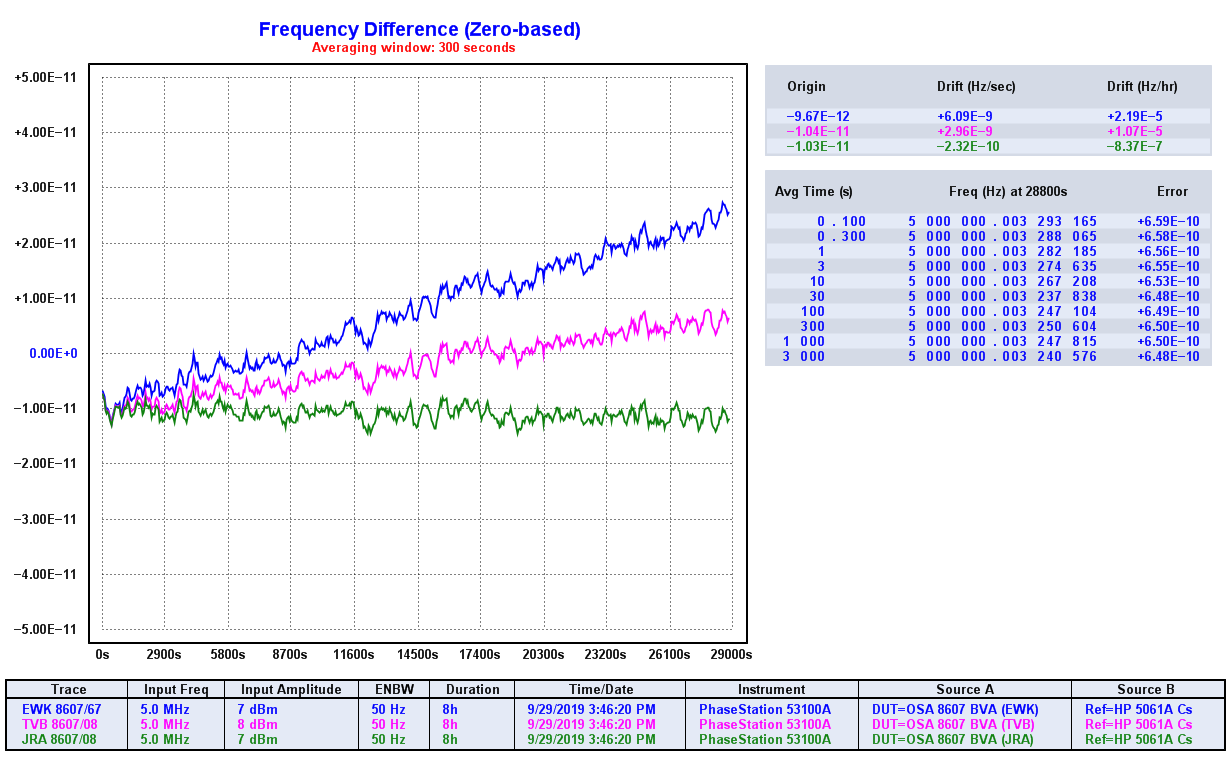 The frequency-difference plot corresponding to the measurement above appears here. JRA exhibits a small amount of drift, EWK shows the most drift, and TVB is positioned almost exactly in between.

This may help explain TVB's degenerate variance in the earlier three-cornered hat measurement. The algorithm makes a reasonable guess at the variance of the EWK unit, but it does a poor job at characterizing the variance of the JRA unit since it's lower than either EWK or TVB, with the difference dominated by linear drift. Consequently the variance of the TVB unit can't be measured reliably beyond t=60s.

We can conclude that the three-cornered hat algorithm is probably doing a good job at taus below 60 seconds, but only the highest-variance oscillator is being characterized even remotely accurately at longer taus. It's interesting to note that the measurement with the lower-quality 8600B OCXO in AN 53100A-2 actually yielded a better three-cornered hat solution. This is likely because the TVB 8607 oscillator had been running for a much longer period of time when the AN 53100A-2 data was collected. 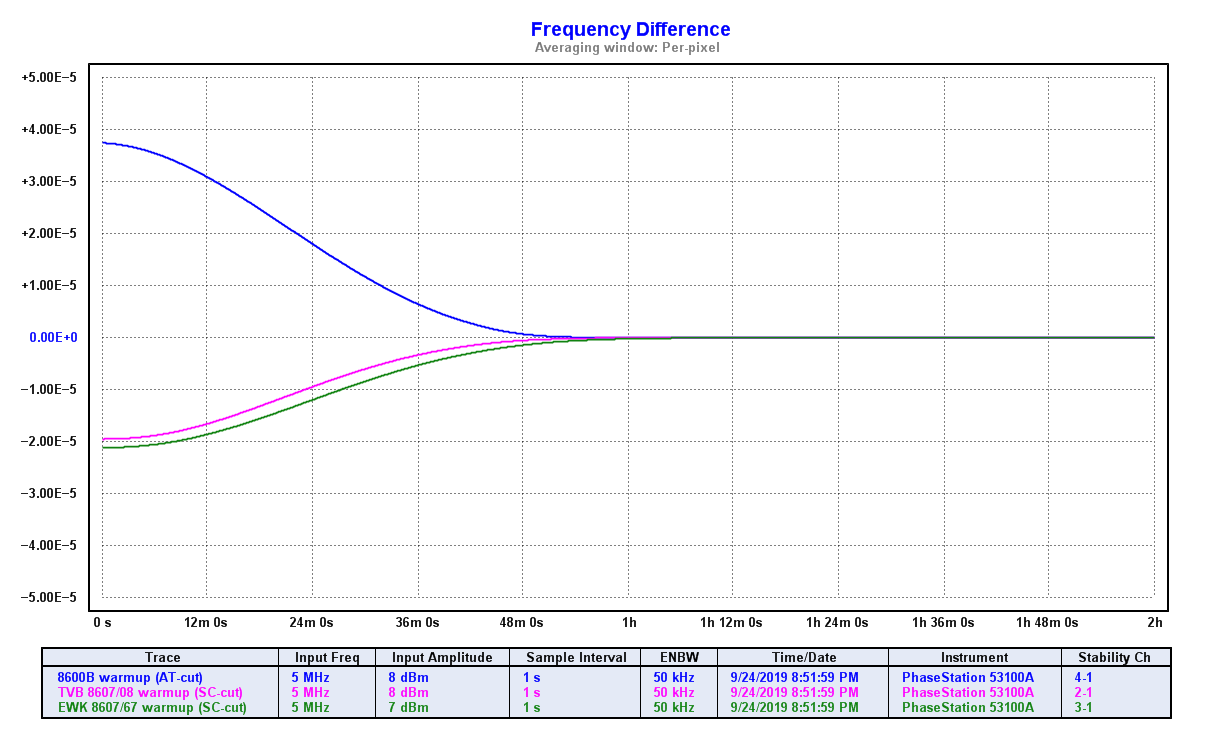 Startup behavior of the EWK and TVB oscillators is observed above, beginning a few seconds after power is applied. The AT-cut crystal in the 8600B 'turns' in the other direction as its oven warms up, relative to the two SC-cut OCXO 8607 parts. 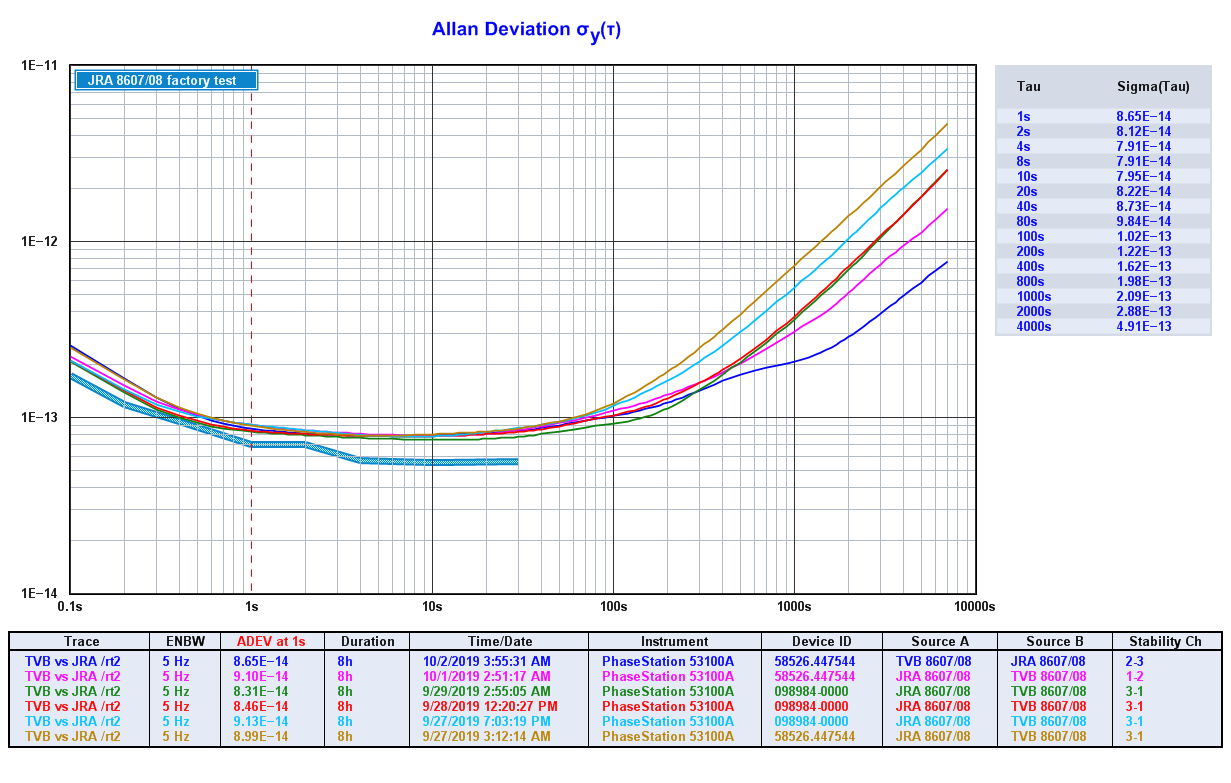 This series of 8-hour runs was taken across several days, showing the TVB and JRA oscillators measured directly against each other. 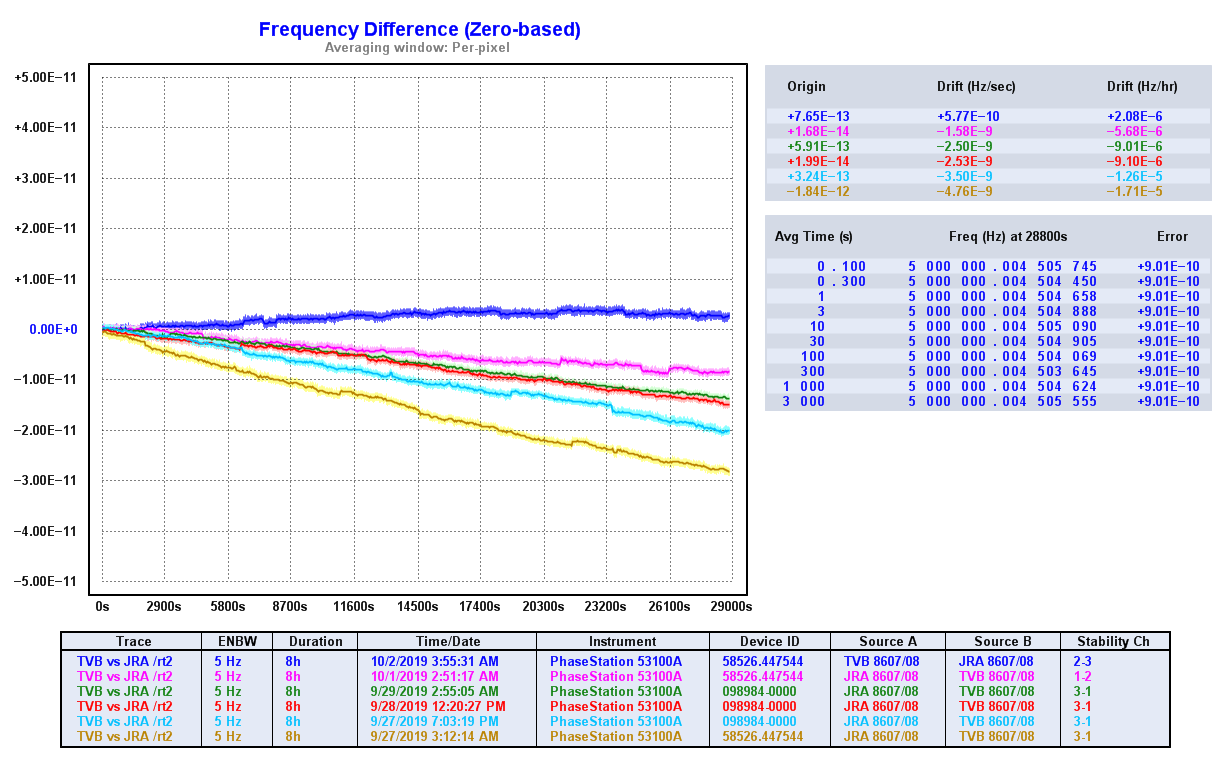 The frequency-difference traces corresponding to the ADEV measurements above reflect the stability improvement as well.

Data for these additional runs can be downloaded here (15 MB).